Amazon had an unforgettable stint nurturing Prime—but like a mother bird, it was time to let its baby fly on its own.

Earlier this year, the e-commerce giant began rolling out a refreshed logo for the subscription service. As Prime started pivoting into stores like Whole Foods, it was a wise decision to detach from its parent and run as its own brand.

Amazon thus stripped its name, as well as its orange-and-black color scheme, off the Prime logomark. The branding is now fully decked in a fresher, brighter blue, and Amazon’s signature smile-like arrow has been incorporated into its base to ever-so-slightly establish the connection between both businesses.

The new Prime branding is now apparent throughout its ecosystem. For instance, Amazon Prime Video has been succinctly dubbed ‘Prime Video’, and Amazon Prime Now has simply become ‘Prime Now’. The refreshed blue hue doubles as a marker to let shoppers know that each of these services promises speedy delivery.

The word “Amazon” is nowhere to be seen in Whole Foods’ stores, uniforms, marketing materials, and app. Apart from the website header, the name also remains invisible on Amazon’s registration page for Prime. Prime is an entity in its own right.

The logo change has made its way across more of Amazon’s mediums. The tape on its delivery boxes has dropped the “Amazon” name, as have its mailer bags.

The revamp was so subtle, it largely went under the radar. Were you eagle-eyed enough to spot this change? 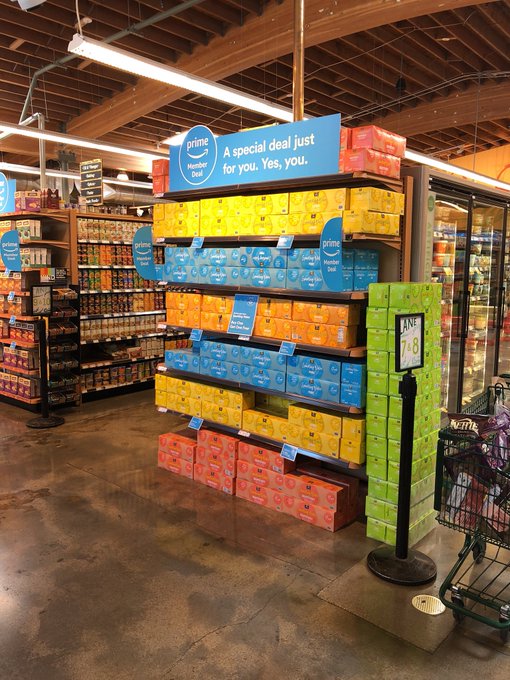 Amazon/Whole Foods is coming after La Croix with private label sparkling water in a can. Prime members buy one get one free. Endcap at checkout. Valuable real estate in store!