Brandikaran | What Apple’s Colorful Logos Might Hint About Its October Product Launch Even
59332
post-template-default,single,single-post,postid-59332,single-format-standard,qode-core-1.2,ajax_fade,page_not_loaded,,brandikaran-ver-2.0, vertical_menu_with_scroll,smooth_scroll,fade_push_text_right,grid_1300,blog_installed,wpb-js-composer js-comp-ver-5.6,vc_responsive

Apple has sent out invitations for its next product launch event to be held at Brooklyn Academy of Music in New York City on 30 October.

Thus far, a mind-boggling 371 variations of its logo has surfaced for the invite, which features the tagline, “There’s more in the making.”

For those curious about what’s in store, the event is anticipated to revolve mainly around new iPad and Mac models.

Apple could possibly debut the 2018 iPad Pro designs, which are expected to come with slimmer bezels and Face ID, sans Home button.

Fans are also expecting to see updates to the MacBook line with a more wallet-friendly successor to the current MacBook Air. It is expected to feature a higher-resolution Retina display and slimmer bezels.

A Mac mini update might also be in store. It is rumored to carry upgraded internals and a faster processor should it be unveiled at the event.

The various logo designs have also left others speculating about its software and Apple Pencil upgrades.

With the new iPad Pros coming up and the recent announcement of the latest Photoshop CC for the iPad, the colorful invitations hint at fresh iPad Pro software strongly targeted towards the creative industry.

Apple could also release a new Apple Pencil for the iPad. One Twitter user wrote, “OK, my theory for the Apple invite art: they were produced by 50 famous artists and designers using the new Apple Pencil and iPad Pro.”

Another possibility inspired by the Brooklyn Academy of Music event venue is that the myriad vibrant logos signal a music-related update.

All this will be answered during Apple’s event on 30 October. 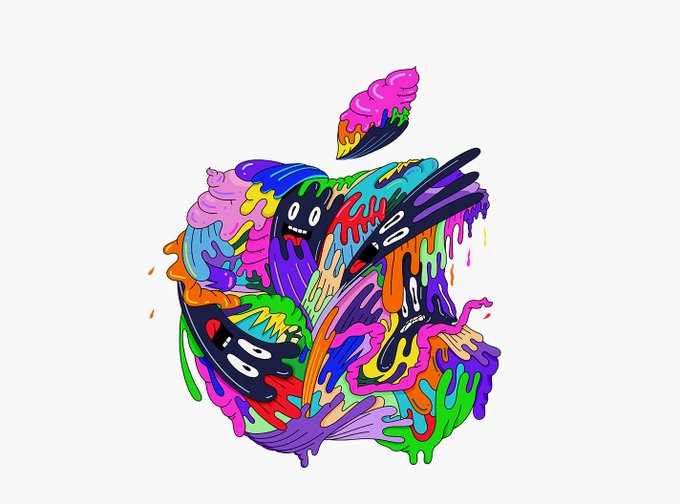 Are all of the Apple logos on the October 30 event invites different? I haven’t seen this one out there yet nor any duplicates. Colleague @heatherkelly quips, “Guarantee they were all made on the iPad.”

I don’t think these invites usually have hints but damn if there’s not an iPad Pencil involved I’m REAL confused by this https://apple.news/AeedB1U1rRa2KxMKykjLnSg …

OK, my theory for the Apple invite art: they were produced by 50 famous artists and designers using the new Apple Pencil and iPad Pro.

What has me most intrigued about the Apple 10/30 event is the abstract version of the classic Apple logo.

Also with the location, this could be a big day for Beats