Tom Wolfe, an innovative American author and journalist who revolutionized news to how you know it today, passed away on Monday at age 88.

The writer, who penned The Right Stuff and The Bonfire of the Vanities, was known for his unconventional spins on news in the 1960s and 1970s. He introduced ‘New Journalism’, a technique that fuses non-fiction with prose; whereas traditional articles were written in wholly objective lights, his method prioritized “truth” over “facts.”

When assigned as a judge at the AIGA communication graphic design competition in 1972, creatives learned that Wolfe was most skeptical about “abstract” logo designs, particularly the brandings for Chase Manhattan bank, Pan Am, Winston Sprocket, and Kor Ban Chemical. Wolfe labeled them, “the most marvelous fraud.”

Logos of this genre are pictorial marks with no recognizable graphics. Other examples include Pepsi’s split circle and adidas’ old striped “flower,” both of which contrast Apple’s distinguishable fruit icon.

“The abstract total-design logo is the most marvelous fraud that the American graphic arts have ever perpetrated upon American business,” he wrote, starting off his critique with a bang.

“Contrary to conventional wisdom, these abstract logos… make absolutely no impact—conscious or unconscious—upon its customers or general public, except insofar as they create a sense of vagueness or confusion… Logos are strictly a vanity industry, and all who enter the field should be merciless cynics if they wish to guarantee satisfaction.”

You can read the full critique in the tweet below. 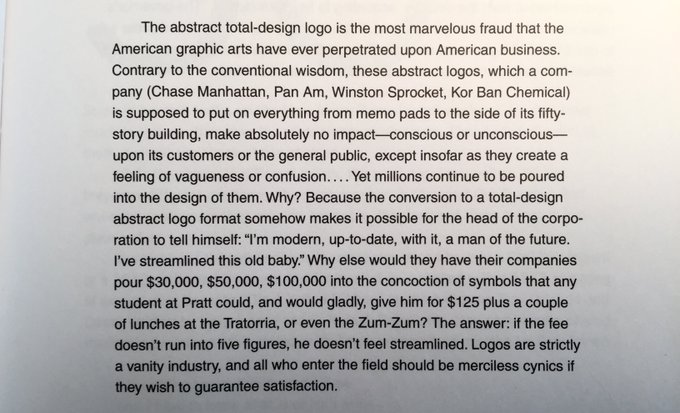 One more thing on Tom Wolfe, specifically as a graphic design critic. Did you know he was a judge for the 1972 @AIGAdesign communication graphics competition? He provided commentary for the catalogue, including this gem:

Cynicism about logo design is de rigueur these days, but completely unspoken 40+ years ago. I remember reading this in design school and being thunderstruck

It seems that Tom Wolfe is pricing the labor of drawing, not the value to the client’s business of how the design works.

Well, I guess, as a cynic and a logo designer, I guess I found my calling…