Brandikaran | Spotify’s Asymmetrical Strokes In Its Logo Design Are Irking Some Of Its Users
59225
post-template-default,single,single-post,postid-59225,single-format-standard,qode-core-1.2,ajax_fade,page_not_loaded,,brandikaran-ver-2.0, vertical_menu_with_scroll,fade_push_text_right,grid_1300,blog_installed,wpb-js-composer js-comp-ver-5.6,vc_responsive

For those of you who haven’t noticed, the strokes inside the Spotify logo are tilted.

Gizmodo’s Jennings Brown noticed that these curved strokes inside the logo had managed to “drive him nuts” as they are not balanced. He decided to carry out research to learn more about the logo and stumbled upon Reddit’s ‘/r/mildlyinfuriating’ subreddit, where he discovered that many others were similarly frustrated with Spotify’s logo.

Some internet users expressed their frustrations on Twitter where one commented, “Me trying to enjoy some music but noticing the Spotify logo is slightly crooked when opening the app.” Another user chimed in with the question, “The new @Spotify logo color made me realize it’s horrifyingly unsymmetrical. Why? Why would you do this? WHY?”

Many Spotify users have reached out to the company, urging it to fix the logo. Brown’s colleague explained that the tilted lines prevent the logo from looking like a Wi-Fi icon. Another colleague added that if the lines were tilted more, the logo would look like an RSS symbol.

In a 2013 interview by Gizmodo with Spotify employees Christian Wilsson and Andreas Holmström, the duo explained that the tilted logo offered “more personality” and looked “more organic.”

The duo tried to fix the logo using the “golden ratio” but it “look[ed] even weird[er].” The article also reveals that the original logo showed the waves “emanating out of the ‘o’” in “Spotify.” The waves are said to illustrate “streaming.” 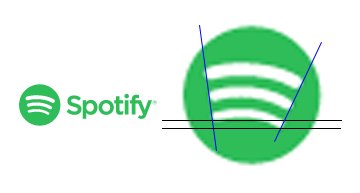 Why? Why would you do this? WHY?

WHY IS YOUR LOGO CROOKED!?!?

[via Gizmodo, opening image via Spotify]