The United States Department of Agriculture (USDA) spent about a decade going back and forth with health food campaigners about the way genetically modified foods are being packaged, and Congress eventually passed a bill in 2016 requiring labels for foods containing GMO ingredients.

After 112,000 responses from consumers and food producers, a set of sample logos were created to identify these engineered foods. A few prototypes are pretty noticeable, and feature bright greens, blues, and yellows, so customers would be less likely to miss them.

For some samples, a curved line sits below the ‘BE’ indicator; others are shaped like suns. Overall, they resemble smiley faces, and raise concerns that they might enforce a belief that GMO foods are good for health.

“I mean, they look like a little smiley face. They’re very pro-biotech, cartoonishly so, and to that extent are, you know, not just imparting information but instead are essentially propaganda for the industry.”

The USDA also recently coined the term ‘BE’, short for “bioengineered,” to replace common phrases like “GMO” or “genetically modified” on packaging. Since the description is unfamiliar and lesser-known, the general public hasn’t taken too well with it.

Kimbrell added, “It’s misleading and confusing to consumers to now switch that up and use a totally different term, bioengineered, that has not been the standard commonplace nomenclature for all of this time.”

The Non-GMO Project charity has also called out the iterations for being “misleading” and vague. “Does this sunshine symbol say genetically modified food to you? Also, no one knows what ‘BE’ means! Tell USDA: Avoid these misleading GMO labels!”

USDA is unable to comment on the logos until they are finalized. Additionally, the public has until 3 July to express its sentiments about the proposal.

While design and art tend to overlap, consumers worry these labels could be too abstract or cartoony. As they’re arguably ambiguous about their purpose, do you think they might fall under ineffective design? 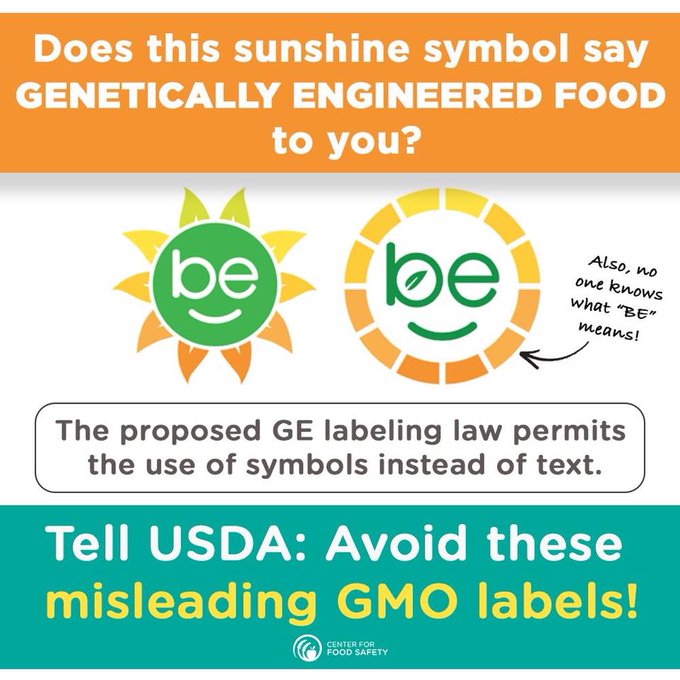 Tell @USDA: Give us clear #GMO labeling! Add your name with just a few clicks below. @CFSTrueFood https://www.centerforfoodsafety.org/actions/5323/tell-usda-give-us-real-gmo-labeling … 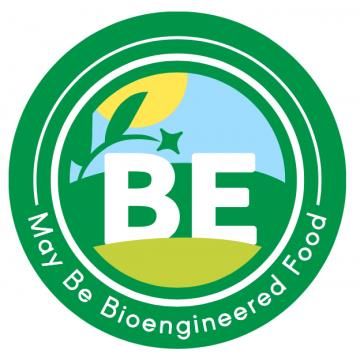 Here’s the USDA’s proposed label for foods containing genetically engineered ingredients. While terms like “GMO,” “GM,” “GE,” are now widely used by everyone, USDA decides to create a new acronym, “BE.” How stupid is that or maybe they want to confuse people more? BE Real USDA. 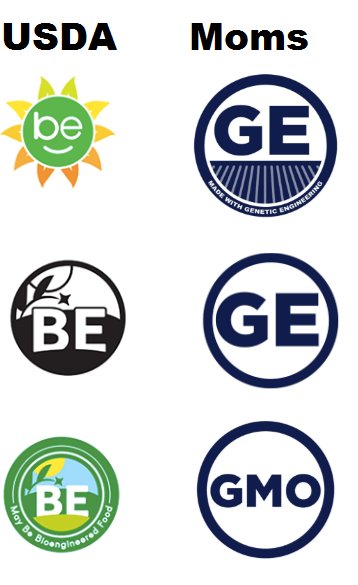 Following USDA proposal for labels on genetically engineered food, anti-GMO group Moms Across America propose their own labels for GMO foods which look less like an organic/green label. https://www.momsacrossamerica.com/last_chance_for_gmo_labeling …

[via NPR, images via Regulations.gov]